Helge studied Biotechnology at the Technical University of Braunschweig, Germany. He entered the world of RNA biology during his PhD at the University of Heidelberg, Germany, where he worked with Dr. Georgios Simos and Dr. Ed Hurt on tRNA biogenesis and nuclear export in yeast. Moving up the ‘evolutionary ladder’, Helge joined the lab of Dr. Frank Slack at Yale University to work on miRNAs (then still termed stRNAs for small temporal RNAs) in C. elegans. In 2005, Helge accepted a junior group leader position at the FMI, and was promoted to senior group leader with tenure in 2011. The work of his team focused initially on miRNA function and regulation, but has subsequently diversified to other areas of RNA and developmental biology. Thus, Helge’s current research interests include developmental clocks (with support from an ERC Advanced Grant) and posttranscriptional mechanisms of (stem) cell fate control in worms and mammals (with support from the SNF and the National Competence Center for Research “RNA and Disease”). Across projects, Helge is particularly interested in understanding molecular mechanisms as they operate in physiological contexts. 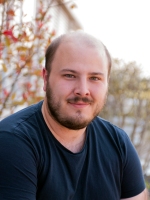 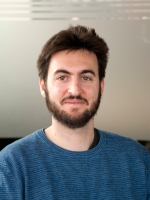 Foivos is from Corfu, Greece. He holds a diploma in Electronics and Computer Engineering from the Technical University of Crete and an MSc in Bioinformatics from the National and Kapodistrian University of Athens. He performed his Phd in Bioinformatics at the University of Basel, where he worked on computational methods to study RNA processing. Foivos is developing software and pipelines to analyze data ranging from RNA-seq, poly(A)-seq and ribo-seq to single cells and third generation sequencing technologies (PacBio, Oxford Nanopore). At the same time, he is collaborating with experimental biologists to help them with the analysis and interpretation of their data. You can visit his personal website here.

Smita has studied Biochemistry in her Bachelor’s and Master’s at the University of Delhi, India. She then pursued her PhD at CSIR – Institute of Genomics and Integrative Biology, New Delhi, in miRNA therapeutics, where she developed novel tools to target aberrantly expressed miRNAs in cancer. Fascinated by the role of these tiny regulators, she is now interested to explore the importance of their stability in shaping development and mechanisms that promote their turnover in C. elegans.

Rajani is from Anantapur, India, and studied Microbiology during his Bachelor of Science. He did his PhD on transcription termination and quality control of RNA using budding yeast Saccharomyces cerevisiae as a model organism at CGM, CNRS, Gif Sur Yvette. He is currently a postdoctoral fellow in the lab and is interested in understanding the role of Argonaute protein complexes in reproduction. 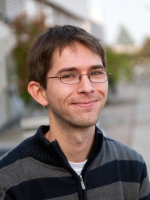 Thomas studied Medicine at the University of Freiburg. He received his MD in membrane protein biochemistry. Having worked as a clinician specializing in nephrology for three years, he is now a postdoctoral scientist in the Grosshans Lab. Thomas is interested in Trim71 mediated gene regulation in embryonic stem cells. Thomas uses methods like Ribosome Profiling and CRAC to identify new Trim71 target genes.

Saheli did her Bachelor’s in Biological Science at Presidency University, Kolkata, where the focus was primarily on Molecular Biology. For her Master’s, she moved to JNCASR, Bangalore, to study the functional overlap of the sleep homeostat and the circadian clock in Drosophila. To further her interest in circuits and clocks, she has now joined the Grosshans Lab, where she intends to investigate the molecular and neural control of gene oscillations during C. elegans development. 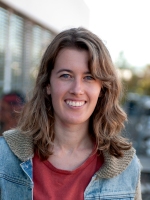 Marit obtained her Bsc and Msc at the Technical University of Delft and Erasmus Medical Center in Rotterdam, where she studied Nanobiology. During her studies, she focused on how to use physics and mathematics to study biology. Further, she joined the Vienna Biocenter summer school, and did an internship at Lumicks in Amsterdam where she gained more experience in microscopy and image analysis. During her PhD, she uses these tools to study the developmental timing of C. elegans.

Michaela studied Molecular Biosciences at the Centre for Organismal Studies of the University of Heidelberg. Following an internship at the Institute for Research in Biomedicine in Barcelona, she worked at the DKFZ in Heidelberg, writing her master thesis and graduating with an MSc degree in Developmental and Stem Cell Biology. In October 2019, she joined the Grosshans Lab as a PhD student focusing on the regulation of oscillatory gene expression during C. elegans development.

Maike obtained her Bachelor’s and Master’s Degree in Molecular Biosciences from the Centre for Organismal Studies (COS), University of Heidelberg. During her Master’s, she focused on Developmental & Stem Cell Biology and investigated asymmetric stem cell division in Germline Stem Cells for her Masters Project. She further gathered experience in the field of Developmental Biology by completing internships at the Karlsruhe Institute of Technology (KIT) and the Harvard Stem Cell Center. In our lab, she is now a PhD student interested in the functional and spatial organization of gene expression oscillations during the development of C. elegans.

Chiara completed her MSc in Molecular and Industrial Biotechnology at University of Bologna, Italy. She was a visiting scientist at EMBL-Monterotondo (Italy) and took part of the International Summer School at Institute of Molecular Biology, Mainz (Germany). She is now a PhD student in the Grosshans Lab and she is interested in the molecular mechanisms that control the development of C. elegans and specifically the role of components of the late heterochronic timer. 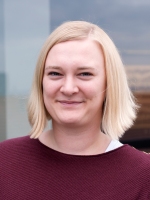 Jana obtained her Master’s degree in Molecular Biology and Genetics of Eukaryotes at the Charles University in Prague. In her diploma project in the group of Michal Kubelka, IAPG AS CR, she focused on the mechanisms that regulate cytoplasmic polyadenylation in mammalian oocytes. She further broadened her knowledge of RNA biology during her internship in the group of Sonia Lopez de Quinto at the School of Biosciences, Cardiff, UK. Jana joined the Grosshans Lab as a PhD student in October 2017. Besides doing science, she likes to eat, iron and optimize. 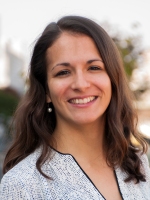 Milou studied Life Science and Technology at the University of Leiden and the Technical University of Delft. She received her master’s degree in Biomedical Sciences at the University of Maastricht. She is now a PhD student in the Grosshans Lab, funded by a Boehringer Ingelheim PhD Fellowship. Milou is interested in the transcriptional mechanisms driving mRNA level oscillations during C. elegans development.

Yannick is a local PhD student, who finished his Bachelor’s degree in Molecular Biology at the Biozentrum (Basel). He then joined the Grosshans group to pursue his Master’s thesis. During that time he got fascinated with nematode development and thus decided to stay for a PhD in our group. Using single animal technologies and genetic manipulation he is studying oscillatory gene expression as well as its role for the development of C. elegans.

Anca holds a BSc in Chemistry-Biology from the West University of Timisoara (Romania) and a MSc in Molecular Biology from the University of Basel (Switzerland). As an independent and meticulous team member, Anca supports scientific experiments and is responsible for maintaining the lab stocks and resources.

Kathrin Kunzer is from Germany and joined the Grosshans lab in 2015 as a lab technician. She finished her apprenticeship as a laboratory technician in biology at F.Hoffmann-La Roche in Basel. Kathrin supports PhD students and Postdocs in the lab and is responsible for the lab organization. 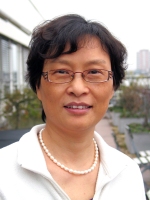 Lan studied TCM in College of Traditional Chinese Medicine in China. She received her MD and did her postdoctoral research, studying electrical properties of cardiac muscle modified by various pharmacological agents at the level of individual cells, in the USA. She joined FMI in 1996 as a research associate, focusing initially on mouse models of motoneuron disease. In 2014, she joined the FMI C. elegans Facility and since 2016, Lan shares appointments between the Facility and the Grosshans Lab. She works alongside PhD students and postdocs to carry out experiments for their projects and she trains people to do microinjection for C. elegans transgenesis.